How Your Company Can Harness the 4 Laws of the Future

How Your Company Can Harness the 4 Laws of the Future

Every leader should learn to think systematically about the future before making important decisions of any kind, especially in the fast-breaking volatile times we experience today. Seemingly never-ending uncertainty reigns. Business and the economy are changing so fast it is hard to keep up.

Not everyone can do a full forecast, but every leader can convene a 2-hour session with a few carefully selected, diverse colleagues to think in a disciplined manner about what’s next for your organization using the 4 Laws of the Future. If you do this systematically every 6 months and apply the learning to your business you will save yourself from most ugly surprises downstream.

Law #1: “If something is unsustainable in the long run, it will end.”

Few things last forever. It is common for organizations to think their strategy, business model or unique technology will last for the foreseeable future. But decay occurs much faster in the Badlands, rendering once-sound strategy obsolete.

Part of every leader’s job is to determine what aspects (strategy, process, product, structure, customer base, etc.) of the organization are unsustainable. Ask yourself, “when will the useful life of these elements end?” “When is the best time to cease investment in it and switch to a new second curve early enough to be a leader?” Think of how technological devices today are replacing both the desktop computer and early smart phones and who got there early. 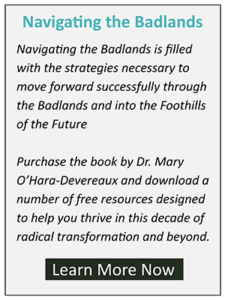 The most difficult question to answer is, “When will it end?”

This is tricky to pinpoint without the rigorous analysis of a forecast but early warning systems can still be developed. Start by generating a list of indicators that will alert you to how a specific strategy, process, or technological tool is progressing through decay towards ending.

One of the more significant current examples of Law# 1 is the US healthcare system, which has increasingly provided decreasing benefits relative to the cost for decades. It is now unaffordable for much of the middle class, has grown faster than inflation for many years, and costs businesses so much it increasingly makes them uncompetitive. The cost reimbursement model is focused on pay-for-service – not outcomes – and drives over-specialization, fragmentation and has led to a decrease in quality of care.

Although the system has leveraged new science and technology (again, making it more expensive!) it is not organized in a way that allows the full advantage of the emerging molecular medicine innovations. And while many have forecast the demise of the health care system for at least 3 decades, the current intersection of the growing trends of longevity, escalating costs and alternative medicine will drive its transformation over the next 10 years.

Law #2: “If something big is going to happen in the future, it has to start sometime.”

In most cases, the ‘big’ we have today started as ‘small’ when the past was the future.
For example, the structure of DNA – the iconic double helix shape – was first described in 1953 by James Watson and Francis Crick. That was an amazing discovery but also a ‘weak signal’ of the possibility of genomic medicine. This discovery led to an international effort, including the Human Genome Project, which ultimately sequenced the complete human genome in 2001. This has led to the development of molecular medicine, now in its early application, which will revolutionize our understanding and treatment of disease and foster a more sophisticated approach to prevention.

Weak signals of the potential ‘big things’ of the future are all around us, on the periphery of awareness. It is the job of business leaders to track those weak signals, paying special attention to those that have the potential to impact their business if they grow into ‘big’ trends or drivers of transformation. It is best to look beyond your usual line of vision to other areas of society, industries, or geographies as often big changes germinate outside the boundaries you would expect. Apple, for instance, developed the iPod by looking at the changing record industry and how people really wanted to buy and listen to music.

What are examples of weak signals today?

In addition to following trends, every company should pay attention to weak signals. As they grow, a proactive approach enables decision-makers to be aware of potential changes, timing, and impact and create sound strategy and contingency plans to take advantage of the opportunities generated.

Law #3: “People tend to overestimate driving forces in the short-term and underestimate their long-term impacts.”

When a new powerful phenomena, technology, or shift occurs people tend to believe it will have a very fast, transformative impact and begin to respond to it as though these large changes are imminent. The emergence of the worldwide web in 1995 is a classic example. People in business began to react as though the Internet had now enabled a platform for e-commerce that would be rapidly adopted and replace most of the existing business models, particularly business-to-consumer.

What ensued was the ‘dot com’ bust and the loss of billions of dollars to premature exuberance. Although the adoption of e-commerce platforms has been huge and transformative over time, what most people missed was the tremendous impact of the Internet on the social lives of people. Even more than e-commerce, the key ‘disruption’ of this disruptive technology has been the new ways that people communicate, organize their lives and learn, now mediated and assisted by social media tools.

Other examples of Law #3 include the rise of China and climate change and the instant widespread impact many predict. Although both are powerful phenomena, their impacts will play out much differently and in many instances much more slowly than is commonly thought.

Law #4: “Beware of conventional wisdom for it is nearly always wrong.”

Conventional wisdom can be described as those sets of beliefs that have become deeply embedded in a culture, nation, or organization that guide behavior and decision-making, often semi-consciously. They become ‘sacred cows.’ Similar to strategy, conventional wisdom decays and loses relevance over time, but often these sacred cows persist long after they have outlived their usefulness.

In the Badlands where the economy, organizations, and social institutions are being driven to respond to massive shifts, conventional wisdom becomes a serious impediment to success and survival. These ‘sacred cows’ are particularly a threat to implementing innovative strategy. They need to be turned out to pasture. The sooner this happens, the faster businesses and individuals can innovate.

These four Laws of the Future can be used as a tool kit to fuel strategic thinking. Try implementing the following process every six months and keep a record of what you generate:

Most importantly, do not keep this learning locked up in an ivory tower. Use it to navigate the Badlands and position your organization (and yourself) to succeed in the era to follow; better yet, use it to help create that era.